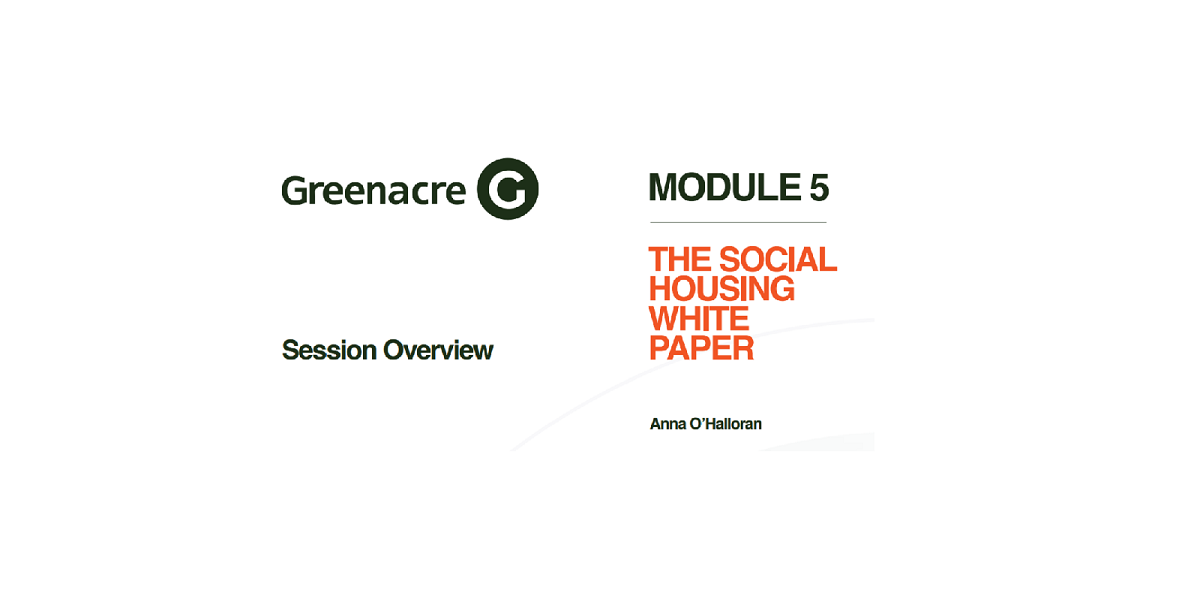 In the fifth of our five-session Eastern Leaders Masterclass series, we were joined by Anna O’Halloran, National Consultancy Manager at TPAS, who took us through the expectations of the White Paper on how organisations should be certain that they are hearing the customer voice.

The role of TPAS in the Green Paper

TPAS are a lobbying group and it is right that the group critique the White Paper. TPAS hosted a number of roadshows in the run up to the Green Paper findings which helped the committee and ministers at that time hear the voice of social housing tenants, which was highly influential in the publication of the Green Paper and subsequently, the White Paper.

Key area 1. To be safe in your home – TPAS are pleased in the main with the content of the whitepaper, and are glad there is an emphasis on building safety, but there still more to do in terms of government acknowledging their role.

Key area 2. To know how your landlord is performing – Lots landlords have already started to act; however many are worried about not just what to report, but how. Consumer expectations have risen in recent years and up until now we not regulated. There are are many good organisations already being transparent, however, it is helpful that others will be brought up to the same standard.

Key area 3. To have your complaints dealt with promptly and fairly – Complaints are a key way of gaining information and feedback from your tenants, and those organisations who have smooth running and accessible complaints systems are already well placed to deal with this. Having a high number of complaints demonstrates two things – it means your customers are sufficiently interested enough in the services you provide to actually make a complaint, and by making the complaint they are trusting that you will deal with it.

Key area 6. To have a good quality home and neighbourhood to live in – Although may organisations have put their own strategy in place, this is about raising national standards for all and holding all organisations to account.

Key area 7.  To be supported to take your first step to ownership – TPAS believes this should not really be included in the White Paper, as it may emphasise stigmatisation of being a social housing tenants, and may indicate where future funding will be focused most.

The customer voice and the tenant engagement process

“There will be tenants who want to proactively engage with the policies of their landlord, and other who simply want to know that their landlord is thinking of them in the way it implements change.” – Social Housing White Paper – The Charter for Social Housing residents

There needs to be a shift in the way more formal structures are used to engage with tenants, as it leaves out a large portion of the tenant voice.

Marcus Rashford shared his personal experiences when trying to change the government’s mind on free school meals. It was such a successful campaign because it was compelling. Most people who engage typically are not tenants with issues or particular problems or are in rent arrears, and are offering their opinions rather than their own experiences. How do we engage with the other tenants?

Housing customers now expect the same level of interaction from us as they do from every other aspect of their lives as customers, and the language we use can often create a barrier, so we need to encourage these ‘other’ tenants to share their experiences and to learn from this.

The Masterclass participants were split into three and and asked to respond to the following questions:

The below are some of the condensed responses:

When we talk about customer voice, we are talking about understanding the needs of our customers both through what they tell us, but also how they interact with us, as well as their expectations. The word ‘voice’ is less relevant today than before because it is more about the interaction rather than a formal structure and being listened to. There are indirect methods to understand what the customer is telling us, rather than them directly telling us, such as call volumes, data and analytical insights.

2. The implications for formal involvement structures

People are more interested in different aspects of their environment now. Involvment shouldn’t look like a tick box exercise, it should be more interactive, and we see the evidence for this in the data, by creating and using data effectively, using the right tools, using modern reporting methods, the right tech and the data that these give us. By testing what works and what doesn’t work to build engagement from a wider stream of previously disengaged tenants and then acting on this information, we can make a connection. If it’s not interesting enough it’s boring and not the type of things people get value from, and simply becomes a tick box governance exercise. Boards are also important but its vital to have  tenant population within them, and there should be an opportunity for development for tenants to become more involved.

There is room for both formal and informal structures – but how do we bring the two together? Traditional tenant involvement is defunct to an extent, yet they have given up their time and they’ve helped us and vice versa. Tenant groups need to be led by the wider customer voice and not those who bring their own personal views. How can we expect 6 people on a Tuesday evening to be representative of 6,000 people? It’s helping facilitate them to be a wider set of eyes and bring the two together.

3. What evidence we would expect to see to be certain that customers are not only being hard, but are also influencing service design and delivery?

Evidence can be shown through satisfaction or a change to a policy, procedure, by continuous monitoring of the customer offer and views from a broad perspective. By showing customer journey mapping and using it as a learning opportunity and evidence that something has been reviewed and by including customers in the validation part and by making customers part of the review and change team. We can co-design services with the customer and take them on the journey, rather than just doing what we think is right. We need to get to the root cause of issues and show that we listened and did something about it, or at  least communicated the reasons why we couldn’t.

Customers cannot take their business elsewhere in housing compared to retail, so engagement and participation is important. Asking the right questions is also really important. We can’t simply assume what they want. The consumer standard will help our tenants to have the best service and move landlords to action.

The overall emphasis and outcome of this session was on the importance of the ‘unspoken voice’ and how important it is to capture, listen, understand and act upon what we find, and to look at the different ways we can do this without leaving any tenant’s voice behind.