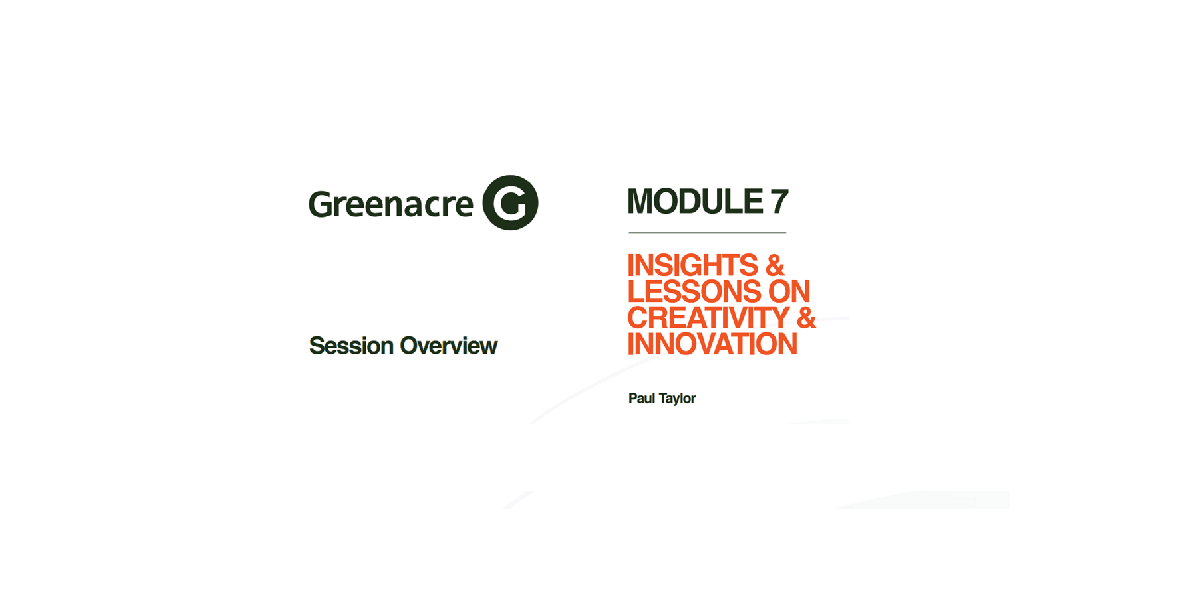 For our seventh Eastern Leaders Masterclass we were joined by Paul Taylor, Innovation Coach, and co-founder of Bromford Lab, who provided us with some practical advice and tools for stimulating innovation and creativity in our organisations.

About 8 years ago, a Director at Bromford asked the question: ‘Who is responsible for growing bright ideas around this organisation?’ What the teams needed was a small, safe space to develop ideas. And so, the pitch to the Chief Executive was that it would be about exploring things that could fail.

Paul was given the opportunity to explore innovative organisations out of sector and what makes them successful. He realised that there is no ‘one size fits all’ approach, and the things that one organisation does could be vastly different from another, however, there were some things that Paul picked up from these organisations, whether large or small, that were consistent throughout.

The consistent key elements that create the right culture for thinking and working differently were:

The practice of high standards: a steady supply of high performing people who are committed

Permission to be different: a culture where it’s allowable, even encouraged, to push back. Everyone

should be ok with questioning assumptions

The ability to think and act experimentally: a tolerance for failure through practical experiments.

Diversity and friction – The ability to disagree about things and debate ideas, instead of all ‘singing from the same hymn sheet.’

Permission to be different and push back – the freedom to disagree regardless of the hierarchy and authority.

Thinking and acting experimentally – being able to try things out without fear of punishment or the black marks of someone who failed at something. Knowing that it’s all about how you learn from it.

These were things Paul wanted to take back to Bromford and build within the organisation.

“Innovation happens when people are free to think, experiment and speculate”- Matt Ridley, ‘How Innovation Works’

The more freedom we have to experiment, the greater the chances are to be successful. People often state that people are bad at innovation in their organisations, however, Steve Blank, one of Silicon Valley’s greatest entrepreneurs believes that we are designed to be bad at innovation.

Have an idea – that solves a problem for customers or colleagues

Make a difference – demonstrate that your idea improves customer experience, or makes us more efficient as a business

Share your story – tell other colleagues what you have done to keep a culture of creativity.

When people talk about innovation, they often think it’s only the ideas part, but that’s the easy bit. It’s about having an idea and then doing something with that idea, which is what most of us don’t do. We then need to prove that idea makes a difference and spread that idea across the organisation.

The better the problem definition that we have for an idea, the more opportunity there is to solve it creatively. Bromford focuses more on the problem definition. We don’t spend enough time in organisations talking about the problem we are trying to fix. It’s about getting the problem right, because if the solution fails, we can always come back and visit something else.

Identifying the problem and then doing something about it

When you are talking about a problem your organisation has got, it’s sometimes about understanding which problems your organisation Is not meant to solve, or at least not alone, and when you should be collaborating with the wider housing sector, the private sector, or anyone else in order to solve the problem. Many of us are quite focused on solving things ourselves rather than solving things in partnerships. The best innovators are particularly good at thinking about supply chain and partnerships.

Once we have identified the problem, one of the issues in organisations is that we like to report on things, and ‘PowerPoint’ them. The best innovating organisations start testing and prototyping straight away. This could mean something really low-fi (low cost, low input, minimal effort). Getting things into the real world as soon as possible, which is something that product-led organisations do all the time, is not something we tend to do within our sector, but it’s very valuable.

The best way to combat uncertainty is to spread your bets with small experiments, and try lots of little things, gathering the learning from those as you go. One of the reasons why the western culture has adopted the silver bullet solution approach can be traced back to how we’ve adapted to industrialisation and manufacturing. Interestingly, in South East Asian countries they tend to problem solve much more collaboratively, working together and using far less resources, as a matter of necessity, which can lead to a better discovery process. How did we learn as children? We learned by failing and by trying again.

Some organisations are guilty of having lots of pilots that don’t face proper evaluation and they just go on and on for years. What Bromford learned from this was that short tests beats pilot nearly every time. A pilot should only be deployed once you’ve got something working and are in the fine-tuning stage.

One of the things that Amazon does very successfully is that they start backwards on things. When they visualise a problem, they don’t frame it as problem. They frame it as the solution, but they mock it up like a press release, as though it is the ‘done deal.’ They then distribute it as a product around all their colleagues, to find out what Amazon customers might think of the idea. This a powerful thing to do, and it has been emulated at Bromford with colleagues.

A checklist for success

How to kill ideas

Only doing what we do best

We are not always the right people to solve the problem – think community first, services last. Adding new activities or services should go hand in hand with decommissioning old ones. It’s good to ask, ‘what are we going to stop doing because of this?’ and identifying something that has to ‘give.’

There are different people skills you need at different points, for example, project delivery is a very different skill set to idea testing. Innovation isn’t about ideas. It’s about the right solution, for the right people, at the right time. For example, coming out of lockdown has meant the timing is terrible for some ideas, perfect for others. Some of the reasons behind this might be cultural, some demographical, some will be financial.

It’s important to ask: What is the problem you are trying to fix? Whose problem is it? Who can help you with it? And what is the right time? Then think about what the easiest and most low-cost way will be that you could start exploring those things.