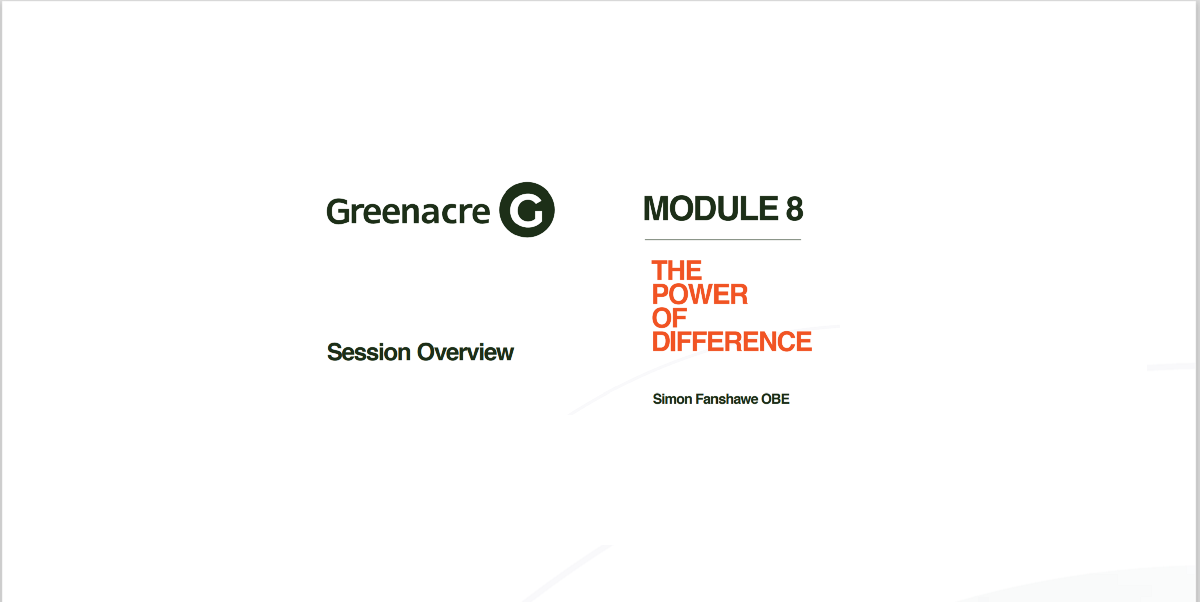 For our eighth and final Eastern Leaders 2020 Masterclass, we were joined by Simon Fanshawe, Co-Founder of Diversity by Design, Chair of Hexagon Housing and Board Member of Powerful Women. Simon was a co-founder of one of the most successful lobby and campaign groups in recent times, the lesbian and gay equality organisation Stonewall, and was also a co-founder of the Kaleidoscope Trust, which supports LGB&T activists abroad. Below is a summary, which Greenacre collected the main themes of, from the session.

Simon kicked off this engaging session by asking the participants to set off into separate pairs and discuss what they feel makes them ‘different’ from each other through their backgrounds or family or identity, and how this influences the way in which they work.

Individual differences within a group

Among the several differences observed, one participant cited preferring structure in the workplace and having come from a familial background of living on a council estate, which had cemented their choice to work in housing due to its ‘community’ feel. Another pair of participants noted they were both part of a large family of siblings, which influenced them both in their careers in different ways, and one being the youngest in the family and becoming a ‘nurturer’ of others whose voices may not be heard in the workplace. It was observed that background experiences can influenced people’s reasons for embarking on their careers and their understanding of the tenants they serve, particularly around the struggle with money that many residents experience, and appreciating the value of money.

Simon drew on the influence of family backgrounds and how they impact people’s roles in the workplace. He cited his own childhood experiences of being part of a military family who moved around a lot while he went to boarding school. This meant that he never knew anyone of his own age where his parents lived. It has left him with an ability of being able to start a conversation with a group of strangers quickly in virtually any setting.

These conversations about our personal backgrounds are really worthwhile having in the workplace, so we can find out about the differences each individual brings to a group, and how their strengths might be pooled together to achieve a common purpose. Some people may be reluctant to talk about themselves, but even this is valuable information about how they like to work and interact with others. The idea and the concept of ‘difference’ is very powerful.

A fresh approach to diversity – two separate but linked focuses: deficits and dividends

Deficits you can discover through quantitative data, but it’s also important to understand deficits in qualitative terms. Dividends, on the other hand, are what you get through the combination of those differences. Deficits which are very common, for instance, are that there are not enough women or people who come from an ethic minority within a team or the senior leadership. In these cases analysing the group experience has salience. For instance, the gender pay gap can tell you something about the totality of women’s pay in comparison to the totality of men’s pay, but it has to be analysed in detail to understand exactly what that is telling you about your organisation. As an example, an organisation might have a small gender pay gap, but the reason for this might be mainly because there are practically no women at the top of the organisation, and there are a lot of lower paid men at the bottom. These deficits are important to understand. They might be local, or they might be sectoral, but you need to understand exactly where you need to make the effort to solve different deficits.

Group disadvantage is important. It’s vital to understand not just the figures but also how people feel within the organisation. People as individuals have very different talents, views and aspirations, and there is a danger of missing the point if all we talk about is ‘BAME’ or’ LGBT’ or any other category that we lump people together in around group disadvantage.

Building high performing teams is all about the combination of differences

Diversity needs to be a very particular combination of differences, in order to give you the dividend. Diversity does not always produce a dividend. It’s best thought of as an approach to talent to further your (team/department/organisation’s) aims. Building high performing teams is all about bringing the right combination of the differences together in the team to achieve common goals.

In housing, if we look at repairs teams, finance teams, communications, learning & development; in all of these different areas where you are providing services to your tenants and working with your employees, the discussion that is most useful is ‘what specific kinds of combination of difference gives us the diversity dividend that will be most beneficial to that function?’ The very presence of difference when it is valued within those teams is what helps to alert the teams to the differences of those outside. We need to be asking ‘what kinds of diversity will help us to do what we are trying to do better?’ We need to be asking not just who we are recruiting, or bringing into the team, but what are they bringing with them through their life experience, their background, their education, their intellect, and any other qualities, that in combination with other people, will really help you to understand the people you are in business for?

What do you think inclusion means?

The team were asked to go back into groups and discuss very briefly what they think inclusion means and describe it in a sentence or two. Blow is a snapshot of their contributions:

As individuals and as groups we can clash with each other and experience the world in very different ways. As leaders, we have to find a way of creating the space in which mutual understanding can happen. That’s why sharing our personal stories about our differences is very important, and being clear on a common objective, so that each individual’s personal situation and view matters less (to an extent) than their ability to collaborate and reach a common objective. Differences can be leveraged when everyone agrees to a common purpose.

The concept of covering

Covering is about the spoken or unspoken conditions of how you are accepted in an organisation. Different organisations will present expectations for covering in different ways. It is a useful tool for leaders in understanding how included your people feel, to ask them ‘does the organisation ‘ask’ you to cover, and if so, when and how?’

The participants were asked to go back into groups and talk about any times they felt they had to cover. One male participant used to feel they had to hide their commitments to their children such as picking them up from school, and hide this in his calendar as another activity, for fear of being judged, but this has now changed, and people feel they are allowed to be much more honest about their familial commitments. Another participant had experienced one of their staff feeling they had to hide their prayer time at work and felt uncomfortable about expressing it.

How do managers create an inclusive environment? By seeing difference, valuing it & combining it.

In the housing industry we’ve had a massive decline is subsidies over the past fifteen years, we have enormous challenges around the carbon agenda, huge challenges post Grenfell around fire safety and the necessity to continue to develop new homes. These will involve all of us having really deep discussions about the priorities for our organisations. We will need to listen to each other, value different viewpoints, and find balances and solutions. And we need to take the same approach when dealing with issues surrounding diversity and inclusion, how we challenge discrimination of all kinds  and use our differences to work together as a group towards our common goals. Disagreements and differences should be respected and valued. It is important to maximise inclusion by creating spaces which are safe for disagreement not from disagreement.

True inclusion and the question of ‘intention’

Understanding the effect of what you say is important. It’s about being sensitive and developing your awareness to understand how such questions might be taken. And not just in relation to race.

When considering your own behaviour  and of those in your teams, it’s important to think about three things:

Intervention – It’s valuable to understand how and when to intervene. Don’t assume that people always want you to intervene on their behalf or that they want you to intervene then and there. Discuss these situations with your colleagues and whether they wish you to intervene, and if so, how and when? As leaders it is important that we take the responsibility of finding out and implementing the most effective intervention, by listening to the recipient of the behaviour. Leaders do need to set the tone of the organsation and their teams by dealing with these issues effectively.

Inquiry – treading on eggshells is not a good route to success. Curiosity is fundamental to recognising what needs to be done. It’s important to find out how people feel in certain situations, how they want to be treated, how they want issues to be dealt with and to be framed. Having strengths-based conversations with people, creating clarity that you are prepared to intervene when there is an issue and creating a positive atmosphere where difference is respected and valued are the three things that create a powerful environment for inclusion. Creating a space for curiosity is very powerful as it leads to innovation.

It is increasingly the case that subjective experience is being seen as the most significant factor in experiences of discrimination. Perception that your people are being heard is vital however, in what follows and the decisions on what to do about it, it is vital to have a process that everyone trusts. To find a resolution, everybody involved must remember their shared collective goals.