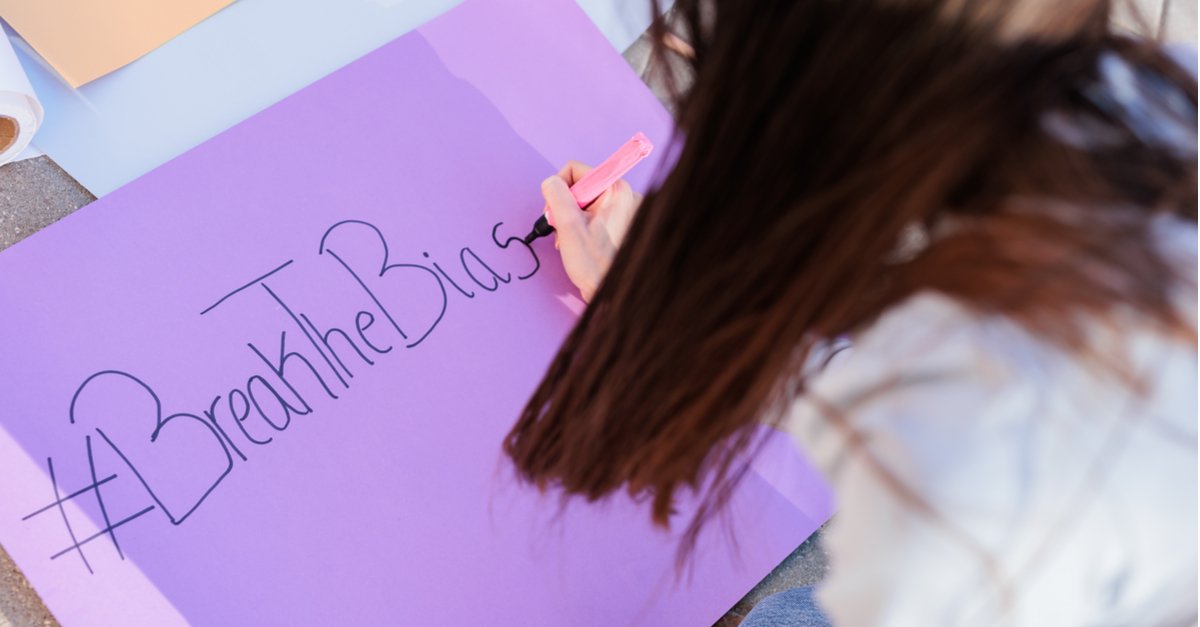 Gender bias exists across every thread of our lives, with research revealing it starts from within our very first familial settings, takes shape throughout our educational systems, becomes entrenched in our workplaces, and is consistently embedded throughout mainstream media and across our societies.

As babies, we are unable to understand gender expectations and attitudes, however, by just two years old most children will have a conscious idea of gender significance, and by the time children reach junior school, they will have a clear sense of how boys and girls are ‘supposed to’ behave and respond. The most up to date ‘nature versus nurture’ studies suggest that the environment we are exposed to plays a crucial part in creating and sustaining gender disparity (Gender Stereotypes in Early Childhood: A Literature Review, Culhane & Bazely).

Despite it being 2022, the majority of households across the globe still subtly set the tone for behavioural norms such as delegating chores in a gender-specific way. Maintenance tasks like mowing the lawn or helping to fix a car are primarily levelled towards boys, whilst girls are more often encouraged to take part in domestic chores such as cooking and cleaning. This division of household labour sets an early standard with an expectancy of children to take on specific roles based on their gender, which is reinforced as they develop towards adulthood (Why gender inequality often starts at home, Plan International).

Schools have also been highlighted as reinforcing the gender stereotypes which discourage girls, and encourage boys to take more risks and be more assertive. Some studies have indicated that teachers engaged less frequently with female students, asking them fewer questions, while at the same time providing males with more feedback. Further to this, the educational materials available in most subjects in the study were male dominant, with less than 30% of authors being female (Gender Equity in the Classroom, Rebecca Alber).

Fast forward to the workplace and this behaviour is still occurring, albeit with more subtlety. We regularly see a hesitancy of many employers to offer constructive feedback to women when attending interviews, appraisals or taking part in team activities, which often leaves them at a disadvantage to their peers. Women are also often overlooked for senior and board level roles, despite statistical evidence to suggest that female weighted boards actually create more profit (How Diverse Leadership Teams Boost Innovation, Lorenzo, Voigt, Tsusaka, Krentz & Abouzahr.

Despite women in the UK making up nearly half of all millionaires and being responsible for 67% of all household buying decisions, women are still experiencing high levels of gender bias throughout all aspects of life no matter how successful they become. And it’s not only men who are enforcing these behaviours. Lengthy studies show that minoritised groups habitually show biases towards their own group, with women often displaying internalised misogynistic behaviours (How unconscious gender bias affects all women across the workplace, Tiwonge Chipeta).

Across our media, gender bias plays a pivotal part in cultural perceptions, attitudes and behaviour. Studies have shown that misrepresentation of gender in the film and television industry have contributed to violence, disrespect and misogynistic views towards women and girls. A lack of female expert representation across our news and information channels also perpetuate the belief that women are more aligned to assist to men in their chosen fields rather than to lead, which creates an ingrained belief that women’s contributions are not as valid or respected. To exacerbate this, when women’s opinions are coveted, news articles tend to be more geared towards ’emotional’ issues, for instance in recent cases such as how the pandemic has impacted child care and domestic violence. Stories such as financial or economic impact are predominantly male-led pieces, and across the globe, only 24% of people in newspaper, television, and radio news are currently women (6 Unbelievable Facts About How Badly Women Are Represented in Media, Leah Rodriguez).

So how do we ‘break the bias’? In short, we have to look at the ‘why’ before we can consciously tackle the ‘how’ head on. We’ve seen the journey gender bias has taken to reach the workplace, but what is perpetuating it’s presence? Partly, it stems from the gender pay gap and lack of transparency, along with historical inequality and discrimination towards women.

Behavioural change occurs when we elicit cultural change, which in turn is driven by effective leadership. With more transparency over pay, more representation at all levels of our organisations and more equity when it comes to opportunity to progress, we are cultivating an environment where gender bias becomes harder to exist. At a business and educational level, unconscious bias training can be effective in helping to eliminate bias from organisational culture, and to build and nurture an organisational or educational strategy which continues to address cultural biases as they take hold.

Media and Familial bias are still deeply ingrained within our society and trickier to tackle, however, once again, it comes down to transparency and effective leadership. With more female leaders and experts represented on our screens and across our media, we create visible roles models for our children (both male and female) to accept, follow and look up to. When we normalise and champion female leadership, the effects are felt across every section of society.

However, breaking the bias will only truly be achieved once we become intentionally aware of how we behave towards our children at home, in schools and as they become adults in the workplace, and by using this awareness to create equitable opportunities for all. The girl taking confident risks in her early settings will be the woman leading her organisation, her community, perhaps even her country, successfully through the challenges of the future.

We use cookies to ensure that we give you the best experience on our website. If you continue to use this site we will assume that you are happy with it.OkPrivacy policy